Stay up-to-date with our latest news.

Princess wasn’t acting like herself. The Andean condor, one of the Philadelphia Zoo’s oldest animal residents, wasn’t flying and was eating less. Lead Bird Keeper Toni Flowers noticed the changes. “It also seemed like she had vision problems.”

As a result, Flowers and additional keepers paid special attention to their long-time charge. They started to feed Princess light-colored food on a dark-blue tray to provide enough contrast for her to find the food.

Confirming the keepers’ suspicions, Zoo veterinarians discovered cataracts in both of Princess’ eyes. Zoo Veterinarian Tim Georoff made the call to Dr. Brady Beale, Staff Ophthalmologist at Penn Vet’s Ryan Hospital, for specialist advice. “Tim asked if I would be willing to see if the cataracts might be contributing to Princess’ inability to maneuver within her enclosure,” Beale said.

The first step was to complete a full work-up to rule out systemic disease as the cause of Princess’ issues. Blood work and radiographs showed that Princess, despite her 60+ years, was healthy. “Her blood work was pristine,” said Beale. Other tests included an ocular exam, an ocular ultrasound, and an electroretinogram to confirm that Princess’ retinas were functioning well, therefore ensuring that removal of her cataracts would successfully restore vision.

“We were confident that, if we could fix her cataracts, we would significantly improve Princess’ quality of life,” said Georoff.

“Her age was certainly a factor, ” Beale said. “And birds are unique because their irises contain striated muscle, meaning they can voluntarily control the opening and closing of their pupils.”

In mammals, medication such as atropine can be used to dilate the pupil. “This is necessary in order to see the entire cataract through a microscope,” explained Beale.

But such medications cannot be used on birds. “You have to use a striated muscle- paralyzing agent,” she said.

So Beale and her team at Penn Vet reached out to veterinary ophthalmologists around the country who had used various agents on birds. “We came up with the safest possible protocol,” Beale said.

Princess was placed under anesthesia, which she tolerated very well, despite her age. Looking through an operating microscope, Beale began the procedure.

“Once you go through the cornea and into the eye, the pupil has to open up – either with medications, like the one we formulated, or with a viscoelastic agent, a gelatin-like substance that can keep the eye inflated and dilate the pupil,” Beale said.

Beale utilized a high-concentration of a viscoelastic agent, which she said “worked beautifully.”

Although the team had done extensive research on the paralyzing drug, and had a drastically diluted version on hand, they didn’t need it. “The viscoelastic agent opened the pupil perfectly,” said Beale.

From there, Beale was able to sculpt out the cataracts in both of Princess’ eyes – not an easy feat, given that a condor eye is half the size of an average dog eye. Beale utilized a phacoemulsification machine, generously donated for the day by Abbott Medical Optics, to emulsify and aspirate the cataracts.

Although she has operated on a variety of animals, even a three-inch-long African cichlid fish, Beale had never performed surgery on a condor before. Her excitement when recalling the surgery is palpable.

“At one point [during the surgery] I actually said, ‘This is so cool!’” said Beale, proving that even the most seasoned surgeons still find amazement in their work. “Everything went great, even better than we had imagined.”

Princess recovered well from anesthesia. Post-surgery, she resided in the Zoo’s animal hospital for a few weeks while staff updated her exhibit. At the hospital, Princess quickly showed signs of improvement while exploring her surroundings.

“Obviously she can’t use an eye chart, but immediately we noticed her dodging the corner, investigating the space,” said Beale. “There was nothing more gratifying.” 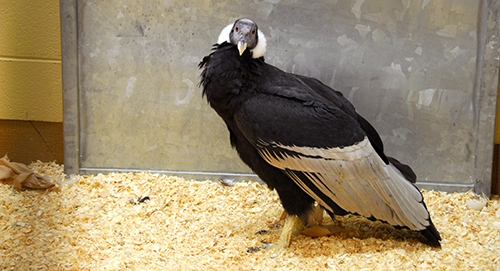 “At one point, she walked right up to me and looked at me eye-to-eye,” Flowers said. “I haven’t seen that in so long. She seems happy, so I’m happy for her.

Today, Princess is back in her exhibit, slowly but surely exploring her space.

The partnership between Penn Vet and the Philadelphia Zoo is longstanding. Experts at Penn Vet have provided specialty care for the Zoo’s animals for many years, while the Zoo has provided an extraordinary resource for faculty and students.

In 2011, a pair of snow leopard cubs required ophthalmic surgery. A Penn Vet team performed the dual surgeries at the Zoo to repair a medical condition called eyelid coloboma. It was another successful collaboration.

“We’ve had a fantastic relationship with Penn Vet,” said Georoff. “They’ve helped with a number of challenging cases of all shapes and sizes, and this was no exception. I knew that we had the best chance of success for Princess because of this partnership.”